Salah has scored two goals over the last four gameweeks and only Jota (eight), Grealish (11) and Trezeguet (13) have taken more shots in the box (SiB) than the Egyptian’s seven over that period. No midfielder has registered more ‘big chances’ (four) over that time. Liverpool have scored eight goals over the last four gameweeks, only Chelsea and Southampton (both nine) have fared better. The Reds are top for ‘big chances’ (15) and shots on target (SoT) (24) over that period. Brighton have shipped four goals in their last four matches, allowing opponents 11 SoT and seven ‘big chances’. Our Fix Algorithm currently projects a point score of 7.1 for the Egyptian.

Vardy has scored three goals over the last four gameweeks, only Bamford (four) has been more prolific. His total of nine SiB Is bettered only by Firmino (10) and Bamford (18). As the Stats Sandbox shows, only Bamford (eight) has been afforded more ‘big chances’ than his seven. Leicester have scored six goals over the last four gameweeks and only Villa (seven), Liverpool (eight), Chelsea and Southampton (both nine) have been more prolific. Their total of 12 ‘big chances’ is only bettered only by Villa (13) and Liverpool (15). Fulham have conceded six goals over their last four matches. Meanwhile, only Sheff. Utd, Leeds (both eight), Everton and Villa (both nine) have conceded more. No team has allowed more SoT than the Cottagers’ 25. Our Fix Algorithm currently projects a point score of 6.7 for Vardy.

De Bruyne has taken 14 shots over the last four gameweeks, no midfielder has registered more. Only five midfielders have created more chances than his nine while only Ziyech and Grealish (both four) have crafted more ‘big chances’ than his three. The impact of a De Bruyne haul on overall rank can be calculated using the Fix Rank Prediction feature. Man. City have scored just three goals over the last four gameweeks but their underlying statistics have been promising. Only Liverpool (40), Villa (43) and Leeds (46) have taken more SiB than their 35 and only Palace (23) and Liverpool (24) have landed more SoT than their 22. Burnley have conceded four goals over the same period while only Newcastle (60) and Sheff. Utd have conceded more shots than their 57. Our Fix Algorithm currently projects a point score of 6.6 for De Bruyne. 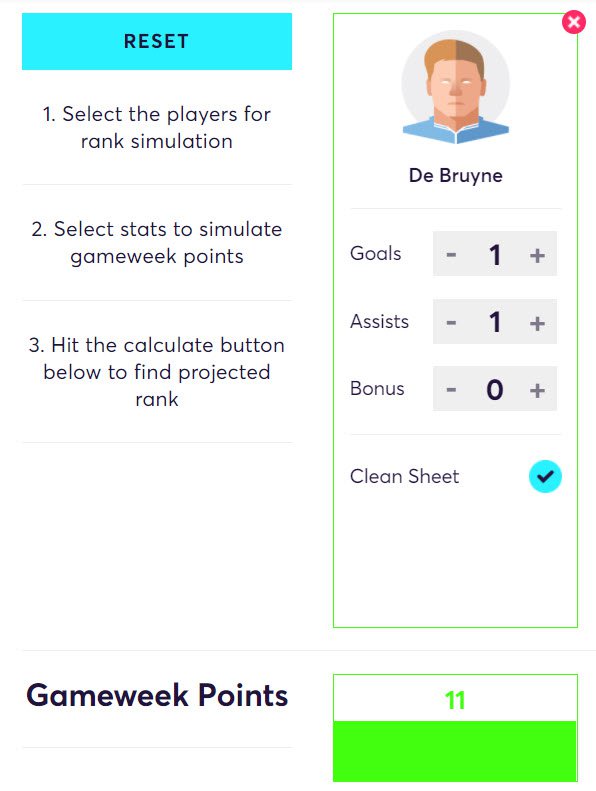