With three goals and two assists in the last four gameweeks, Vardy has averaged 6.8 points per game (PPG) as per our Fix Heatmaps feature. The Leicester talisman has amassed totals of seven ‘big chances’ and eight shots on target (SoT) in that time, to rank behind only Bamford amongst Fantasy Premier League (FPL) forwards. While only Firmino (10) and Bamford (18) have taken more than his nine shots in the box (SiB). Leicester have scored six goals over the last four gameweeks, only Villa (seven), Liverpool (eight), Chelsea and Southampton (both nine) have scored more. Their total of 12 ‘big chances’ is bettered only by Villa (13) and Liverpool (15). Fulham have conceded six goals over their last four matches and only Sheff. Utd, Leeds (both eight), Everton and Villa (both nine) have shipped more. No team has conceded more SoT than the Cottagers’ 25. Our Fix Algorithm currently projects a point score of 7.4 for Vardy. 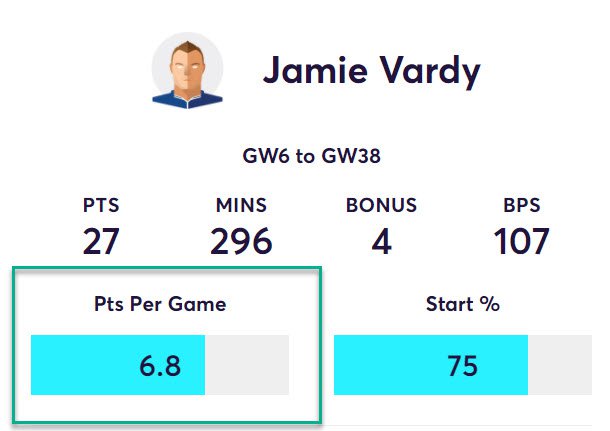 With two assists and a missed penalty in the last three gameweeks, De Bruyne has averaged 3.7 PPG since his return from injury. The Belgian has attempted eight assists over that period to rank joint-fourth amongst FPL midfielders just behind Ziyech, Groß (each nine) and Barkley (10). As the Stats Sandbox shows, no player across all positions has fired more than his 13 shots in that time. Man. City have scored just three goals over the last four gameweeks but their underlying numbers have been promising. Only Liverpool (40), Villa (43) and Leeds (46) have taken more SiB than their 35 and only Palace (23) and Liverpool (24) have landed more SoT than their 22. Burnley have conceded four goals over the same period while only Newcastle (60) and Sheff. Utd have allowed opponents more shots than their 57. Our Fix Algorithm currently projects a point score of 6.3 for the Belgian.

Calvert-Lewin has been directly involved in 80% of his team’s goals in the last four gameweeks (three goals, one assist), where he has averaged 6.8 PPG. The 23-year-old has landed five SoT over that period only behind Vardy (eight) and Bamford (nine) amongst FPL forwards. He ranks joint-sixth for 'big chances' (three) and joint-seventh for SiB (seven). He is the most owned player in the game at 59.1% ownership as per our FPL Statistics feature. Everton have scored five goals over the last four gameweeks, creating five ‘big chances’ and landing 14 SoT. Leeds have conceded eight goals over the same period while only Villa and Everton (both nine) have been more porous. Leeds have allowed opponents 12 ‘big chances’ over those matches and only Sheff. Utd (13) have fared worse. Our Fix Algorithm currently projects a point score of 5.3 for Calvert-Lewin. 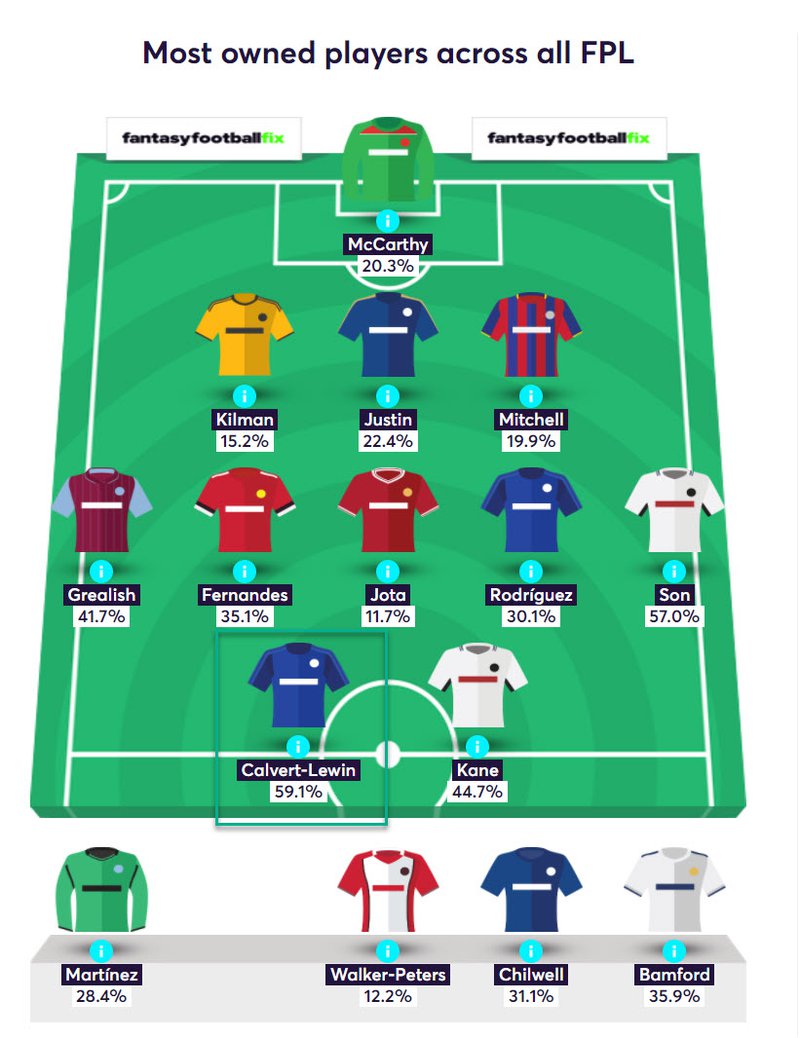 Jota has earned starts in three of the last four gameweeks, where he has netted three goals and returned an average of 7.0 PPG. No FPL midfielder has landed more than his six SoT over that period, while only Salah can equal his four ‘big chances’. Grealish (11) and Trézéguet (13) are the only two players that can better his eight SiB. He is the most transferred in player this gameweek with nearly 400,000 transfers as per our Transfer Stats feature. Liverpool have scored eight goals over the last four gameweek, while only Chelsea and Southampton (both nine) have been more prolific. The Champions are top for ‘big chances’ (15) and SoT (24) over that period. Brighton have conceded four goals in their last four matches, allowing opponents 11 SoT and seven ‘big chances’. Our Fix Algorithm currently projects a point score of 2.8 for Jota - much down to the lack of data to go on so far. 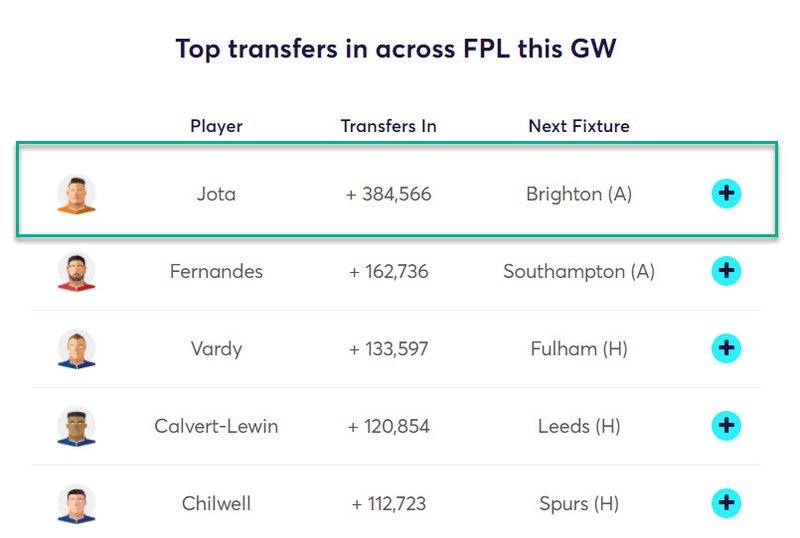 Robertson earned his fourth attacking return of the season (one goal, three assists) as Liverpool outclassed Leicester in a 3-0 win. The left-back has contributed 11 attempted assists in the last six gameweeks, with only Cresswell (12) and Cancelo (15) producing more amongst defenders. He ranks top amongst players in his position with 22 touches in the opposition’s box, beating Chilwell (17) and Lamptey (19). Liverpool have conceded just three goals over the last four matches, while only Man. Utd (two), Spurs and Chelsea (both one) have been more frugal. Wolves, Chelsea (both 33), Man. Utd (27) and Man. City (23) have allowed opponents fewer shots than their 35. Brighton have scored four goals over the same period and only Burnley (32), Sheff. Utd (31) and Newcastle (28) have taken fewer shots than their 37. Our Fix Algorithm currently projects a 30% chance of a Liverpool clean sheet and a point score of 4.7 for Robertson.