Guardiola was full of praise after Sterling’s 11-minute hat-trick in the Champions League midweek, with the Englishman also playing a key role in both of Agüero’s strikes. Highly rated as per the Fix Performance Report feature, the 24-year-old recorded his first Fantasy Premier League (FPL) assist of the season against Palace in gameweek nine, with a perfectly lifted through ball to D. Silva and was unfortunate not to come away with more, scoring 10.2 expected FPL points (xFPL). He created two ‘big chances’ during the game and fired four shots inside the box (SiB), with two of his efforts deemed to be ‘big chances’ missed. Man. City continue to top all the attacking metrics – goals (29), shots (189), shots on target (SoT) (70) and 'big chances’ (43). The Villans have allowed more shots (162) than any team in the league and only Norwich (103) have allowed opponents more SiB than their 100. Our Fix Algorithm projects a point score of 7.4 for Sterling. 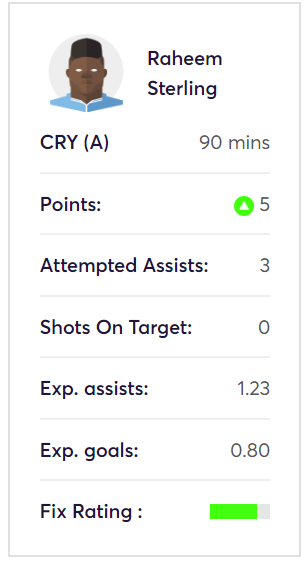 After being restricted to just one attempt at goal during the away defeat to Sheff. United, Aubameyang will be looking to get back to scoring ways when the Gunners host Palace on Sunday. As the Stats Sandbox feature shows, the 30-year-old has netted three goals in four starts at the Emirates this season, with only four FPL forwards bettering his totals of 10 SiB and six SoT, during home matches. Only Agüero (15) could better his total of 13 goals in 19 home matches last season, with no player recording more than Aubameyang’s 19 ‘big chances’. Arsenal have scored eight goals in their four matches at the Emirates so far, landing 25 SoT, an average of over six a game. Their opponents Palace have conceded seven goals on the road this season and are yet to keep a clean sheet on their travels. Our Fix Algorithm projects a point score of 5.3 for the Gabonese.

Abraham boasts an impressive record on the road this season, with no player scoring as many as his six away goals. The 22-year-old has bagged in each of the last three away matches, helping to secure wins over Southampton, Wolves and Norwich and is the most owned player in the top 1000 with 72% ownership as per our Fix FPL Statistics feature. Since gameweek three, no player has fired as many as his 17 SoT or been afforded as many as his 12 ‘big chances’, while only Agüero can match his total of 23 SiB. The Argentinian (4.53) is the only player to better Abraham’s 4.43 xG during that period. Only Man. City (19) have scored more goals than Chelsea’s 15 over the last six gameweeks and the Blues’ trail only the defending champions for ‘big chances’ (26) over that period. Their opponents Burnley have conceded eight goals over the same period, keeping just two clean sheets. They have allowed opponents 86 shots, with only eight teams faring worse. Our Fix Algorithm projects a point score of 4.6 for Abraham. 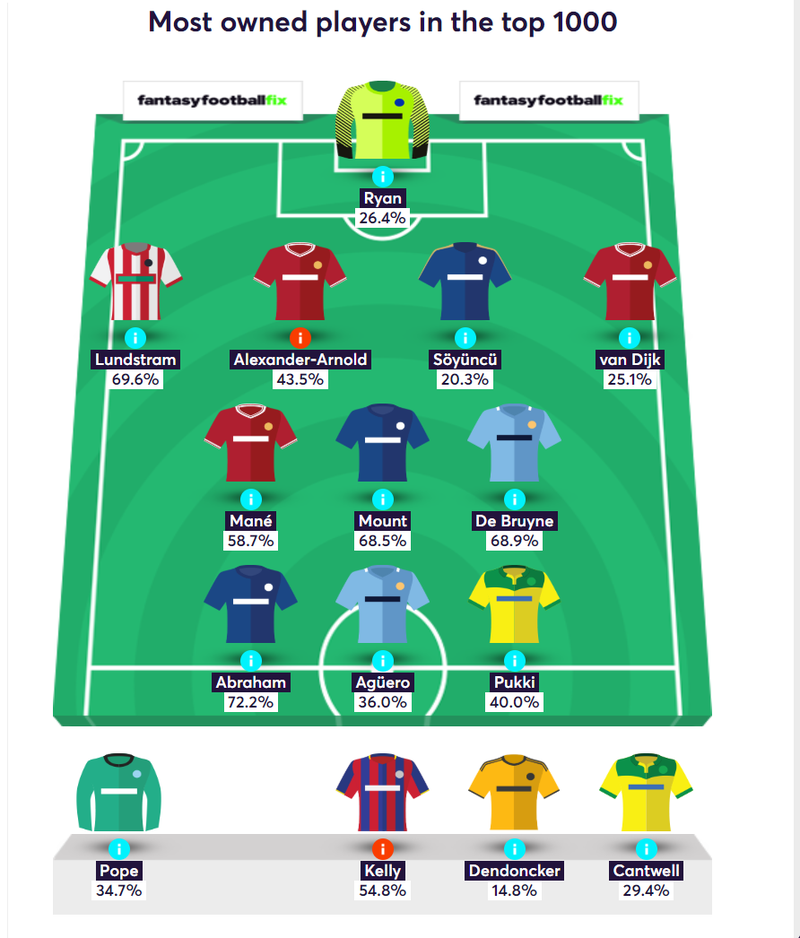 Brighton’s 2-1 defeat to Villa saw Groß pick up his second assist of the season, from a total of five attempted assists; only Grealish (six) managed more in gameweek nine. As the Stats Sandbox feature shows, the German has earned starts in each of the last five gameweeks, with his total of 19 attempted assists ranking top amongst all players, ahead of Grealish (17), Alexander-Arnold (16) and De Bruyne (15). That total includes three ‘big chances’ created, which can only be bettered by De Bruyne, Sterling (each four) and Firmino (five). The 28-year-old has also taken 12 goal attempts during this period, with only Maupay (18) firing more amongst teammates. Brighton have only scored four goals in the last four gameweeks but their underlying statistics indicate they have been unlucky. Only Southampton (63), Chelsea (66), Villa (76) and Man. City (86) have taken more shots than the Seagulls 61 over the last four gameweeks which is impressive considering they played Chelsea and Spurs over those matches. Everton have conceded six goals over the same period with only five teams conceding more. Our Fix Algorithm projects a point score of 3.8 for Groß.

Mendy could be in line to make consecutive Premier League starts after Zinchenko missed the midweek win over Atalanta due to a knee injury. The left-back completed 90 minutes for the first time this season during the 2-0 win over Crystal Palace in gameweek nine. He provided six assists in 10 appearances last season, averaging 1.3 attempted assists and 0.4 ‘big chances’ created per 90 minutes. Only Aurier (0.64) and Walker-Peters (0.72) averaged more than his 0.6 FPL assists per 90 minutes, amongst defenders. Man. City have only conceded three goals over the last four gameweeks, keeping two clean sheets. Only Chelsea (29) restricted their opponents to fewer shots than Man. City’s 31 over that same period. Although Villa lead the way for SoT over the aforementioned period (32), it is worth mentioning that they played Arsenal, Burnley, Norwich and Brighton over that run and the visit to the Etihad is likely to be far more challenging. Our Fix Algorithm projects a 50% chance of a Man. City clean sheet and a point score of 4.6 for Mendy.