Grealish tops the xFPL table this week with a score of 11.7 indicating his 13-point Fantasy Premier League (FPL) return was no fluke. He attempted six assists, the most of any player this gameweek and also landed two shots on target (SoT). No player took more shots in the box (SiB) than Jesus’ eight and he also led the way for SoT with four. His xFPL score of 9.2 indicates he really should have had more returns. Wood was afforded the most ‘big chances’ (three) but could only convert one of them, notching an xFPL score of 7.1. Amongst defenders, Pereira’s numbers stand out. The Portuguese attempted five assists but none of these were ‘big chances’ which means he only registered an xFPL score of 3.3. Sterling owners can consider themselves unlucky, he created two ‘big chances’ and was afforded two himself, notching an xFPL score of 10.2.

Chelsea’s young winger made it three assists in as many games and also racked up three bonus points as the Blues’ won their third league game in a row. Priced at just 6.0 in FPL he looks to be back to full fitness following his injury and he was the creative hub of the Chelsea team, attempting five assists. He also took two shots and appears to be the closest thing Chelsea have to a Hazard replacement. With Mount and Abraham already featuring in many FPL teams, there is a case to be made for Hudson-Odoi over Tomori as the third Chelsea asset. As the Fix Heatmaps feature shows, since his return to the side in gameweek seven, Hudson-Odoi has beaten highly-owned, Mount, in almost every attacking metric. He has attempted more assists (nine to six) and taken more SiB (five to three). While there is arguably more competition for places in Hudson-Odoi’s position in the form of Pedro, Pulisic etc., it is hard to see Lampard dropping the youngster given his current form. At 6.0 and just 2.3% ownership to Mount’s 37%, he represents a great differential.

Pukki disappointed his owners yet again with another blank and the Finn is currently the most sold player this week as per our Transfer Stats feature. His replacement options are put under the scanner using the Fix Comparison Matrix for the last four gameweeks and two forwards really stand out – Ings and Wood. The Saints man has scored in each of the last three games and despite playing the least minutes of the forwards under consideration he leads the way for SiB with 13, and only trails Jimenez for attempted assists. Wood has been going under-the-radar despite four goals in as many matches and no player across the league has been afforded more ‘big chances’ than his eight over that period. Both forwards sit at under 5% ownership at the time of writing and are cheaper than Pukki, so can be easily downgraded to. Maupay also appears to be a decent option but the Brighton man has struggled to convert his shots (16) to goals (one) so far. 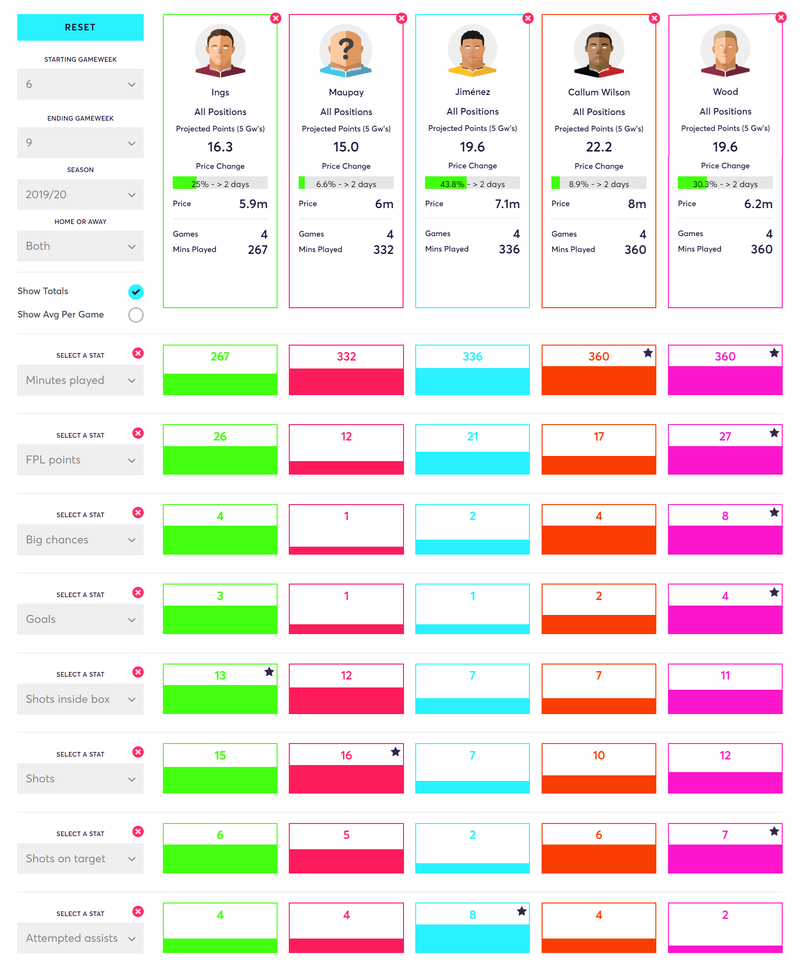