Salah tops the Gameweek 29 Stats Sandbox for xFPL with a score of 10.67. The Egyptian took a whopping seven shots, landed three shots on target (SoT) and registered an 'Expected Goals' (xG) figure of 1.29 largely due to his penalty. Toney also benefited from penalty duties with an xFPL score of 10.29 with his 1.24 xG accounting for a large chunk of it. Despite being the top Fantasy Premier League (FPL) scorer of the week so far with 17 points, Ronaldo is only fifth for xFPL score (8.39) with eight shots - five of which were on target. The Portugal talisman was only afforded one 'big chance' and his seven other shots were fairly low xG attempts.

Havertz continued his good form with a late goal, the German landed all three of his shots on target and was afforded two 'big chances', while no player was afforded more over the weekend. Raphinha's xFPL score of 10.26 indicates his owners were unlucky and the Brazilian should have notched more FPL points than the five he managed. The Brazilian attempted four assists, took three shots, two of which hit the woodwork and registered an xG of 0.87. He registered the highest non-penalty xG of any player over the weekend. Ødegaard was the most creative player with six attempted assists but unfortunately none of these were converted and the Norwegian registered an xFPL score of just 3.94.

Arsenal top the Stats Sandbox Team Stats for both shots (21) and xG (2.93). They recorded three 'big chances' with only Leeds (five) faring better. The Yorkshire side missed some gilt-edged opportunities as their xG of 2.86 shows. Wolves took just five shots in the box (SiB) and registered an xG of just 0.59 in their win against Everton, the lowest of any winning side this weekend. Liverpool led the way for SoT (nine) with Burnley bottom (one). 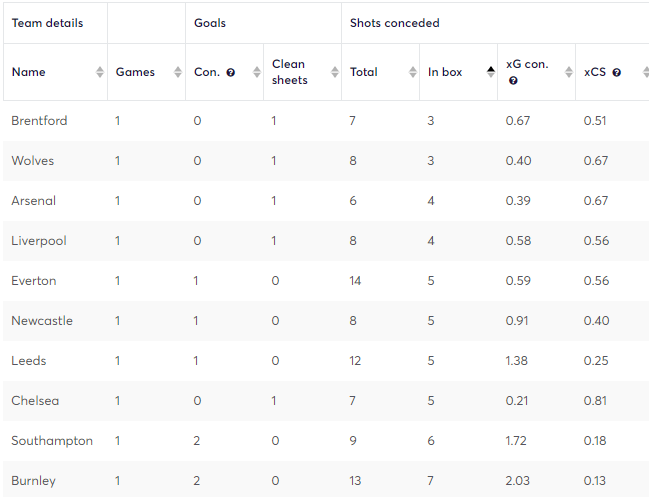 Brentford and Wolves restricted their opponents to just three SiB and conceded an xG of just 0.67 and 0.40 respectively. The Gunners once again impressed in defence and only allowed four SiB with 0.39 xGC ('Expected Goals' conceded). Meanwhile, only Chelsea (0.21) registered a lower xGC. Spurs were eighth for xGC (0.94) but conceded the most goals (three) this weekend having only offered up a total of 10 shots.